These are the earliest memories of my childhood. There was a steep red anthill fifty feet in front of my grandfather and grandmother’s house. The entire village had over fifty houses built in 2 rows of straight lines. The approximately thirty by fifty feet houses were built of chopped trees, natural fiber, mud walls, dark smooth dirt floors, and grass roofs.  The large group of boys who were my cousins, my friends, and children from the many clans in the village played every day on the anthill. We would climb on to the top and slide down on our bottoms with giddy screams, laughter, and excitement. My grandfather would yell at us to stop because we were making ourselves dirty with red clay dust. My grandfather even warned me that I would put holes on my only shorts I was lucky to have. Most children and adults had nkhwamba or rugs for clothes that barely covered their private parts.

After about two weeks, sure enough there were two holes on the bottom of my shorts that exposed two portions of my buns. The poorest children had it worst because they would have no shirt and only remnants of shorts that barely covered their fronts. Nobody cared.

Since we were so young, we had very few chores. My grandparents and other adults would occasionally send us  to fetch them a drink of water from the house using a nkhombo or drinking gourd. They would ask me to chase the chickens away from the corn they were shacking. Other than these few child chores, our days were filled with play around the village. It was a child’s dream.

We fetched wild fruits around the village, learnt to strip fiber from small twigs and bushes to make string to make bows and arrows. We would tell folk tales sometimes secretly. The taboo my grandmother warmed us about was that if we told folk tales during the day our grandmothers or parents would turn into statues. We played mboko. The games were limitless. We ran and walked so much during the day from dawn to dusk that my grandmother could barely feed us at dinner before we would be dozing and falling asleep.

One day word spread that the men had met at the mphala and had made a major very exciting decision. The mphala is a structure located outside the village were all the older boys and men of the village ate together. This is where they fixed bows and arrows, carved cooking sticks, mended axes, and made major decisions. All the women from all households were required to cook and send their meals to the mphala.

The decision was that after the people of Chipewa village had lived in this location for more than ten years, the houses had decay, gotten too old, and some were collapsing beyond repair. There was erosion and some deep gullies in some parts of the village after so many rainy seasons. Some people who had died had their homes demolished made the village look not so good because there were piles of rubble where the homes of the deceased used to stand. The decision had been made that the whole village would  sama.

Kusama meant that the entire village would move and relocate to a new carefully chosen land. The location had to be near adequate water, farm fields, abundant available natural resources for building structures, and have good drainage. The next few months from November to March would be the last time on this location in this village. During the next harvest season, the entire village would be working on building totally new structures at the new village. After the new structure were built including new homes, kitchens, nkhokwe food storage structures, chicken coups, everyone including livestock would move into the fresh new surroundings.

Once we heard the news, we children went wild with excitement. We jumped and ran around screaming:

After we had been screaming for a while, it occurred to us children that we would not be able to move everything from the village especially our large red steep anthill. When I asked my grandmother if we could move the anthill, she laughed and told us we would find new playing spots at the new village. My grandfather chuckled saying he was glad he couldn’t move the anthill that had been responsible for destroying our only shorts and exposing our bare bottoms causing kwenda nkhule or to walk with parts of your private body exposed.

While we children could not wait to move, all the adults were making the many arrangements. The old village we were living in was called mang’huba and the new village is called mathangeni. The next four months of the rain season from November up to late March, there was working in the fields to grow food such as vingoma or maize or corn, skaba or peanuts, batanje or pumpkins, nchunga ziswesi or red kidney beans,  nkhunde or peas, mbwete or boholi or sweet potatoes, vikhawu or cassava, kambala or finger millet. The old maize or peanuts stored from the previous  growing season were called chomba while the fresh crop was called vamankhoro.

My grandparents were good farmers because they always had enough old maize and peanuts in March when the new crop matured in the fields.

During March of that year, all the adults gathered at the sight of the new village or mang’huba with hoes and men with their axes. They cleared a rectangular space about half a mile by about a hundred yards. All the more than fifty houses were to be built in two straight lines. Outside these houses were to be located small huts and kitchens. Outside behind the huts were chicken coups and nkhokwe storage structures for maize and corn. Next to these structures were structure for chibaya or places for goats or cows to be penned in. 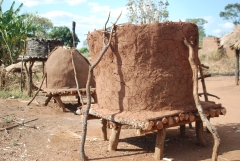 From that time up to when the village moved, all adults worked in the village every day. Each man of the household and boys went into the bush to chop down and haul large trees, fibers, and many smaller shrubs. These were all used to build the walls, provide large support pillars for the houses. All the structures were built as needed day after day. Women and girls had the responsibility of cutting the massive amounts of tall elephant grass needed to roof all the structures of each household. They went far from the village, chopped the grass and tied it into large bundles. They would carry the grass on their heads to the new site in the village.

One event was memorable. My grandfather had finished chopping the trees, digging the foundation of the house, inserting the chopped parts of the a tree to make the walls, and he had erected the skeleton of the roof of the house. Once each house had reached that stage, it was tedious for each man and woman to make mud walls and put grass on the roofs on their own. So my grandparents held makande.

On a designated day, all the men and women and children of the village gathered at my grandparents’ unfinished house. The women drew water, the  men dug some dirt in a pit and poured the water in it. The women began to sing. The women jumped into the pit and began to mix the dirt with their feet to make wet thick mud. The men meanwhile climbed on top of the roof and hoisted the roofing grass to begin the roofing. Meanwhile, my grandmother had boiling large clay pots of plain maize known as makande to feed more than 100 people.

We children were excited as adults would send us to get a knife or an axe. They would ask us to help by holding on to the piece of fiber while the adult made a knot or sliced thinner strips of the fiber. They would send us to get them a drink of water. They would ask us if we were hungry yet for makande. We would shake our heads. The adults would tease us sometimes by asking if we would be strong enough when we grew up as young men to build a big house like this one for a wife. They would tell us to watch and learn because this is how a man builds a big strong house for a wife and family, they would say. 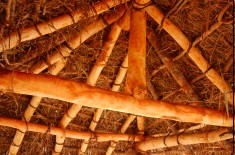 When the roofing was completed, the women began to carry on their heads the thick mud in containers to the house. The mud was carried in large open gourds, large old clay pots, and baskets. The women sung and began to patch the walls. After the entire wall was completed in a matter of a few hours, everyone gathered together; men in one group and women in another group. In front of each group were large containers of the cooked maize. It was all dished out to groups of people in large wooden plates known as ngwembe and a few metal plates.

Everyone gathered in small groups under the shades of trees and shrubs in the afternoon sun. We happily ate the cooked makande maize or corn amidst conversation and laughter. 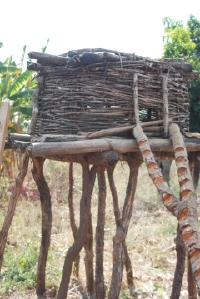 During the coming days, we enjoyed makande after makande as each of the dozens of households arranged for makande as they wanted to finish the roofing and making the mud walls.

The entire village took a few months to get the new food harvest into the new nkhokwe structures. Many of the few household possessions were moved very easily to the new village. Once all the houses and the major important structures had been completed, the entire village moved from mang’huba to mathangeni. One day all the men gathered at the old village, and demolished all the standing old houses.

At the new village, we children soon found new nooks and places to play, new wild trees for such fruits as nthumbuzgha, kasokolowe, masuke, and nchenja. Our best spot was a small swimming spot along the Denkhule Creek. But nothing ever replaced sliding down our tall red anthill.