We have all watched those exciting colorful documentaries on TV of the Cheetah chasing the swift Thompson Gazelle at high speeds of 65 mph or 104 Km Per hour zigzagging through the Savannah plains in a cloud of dust. Once the Cheetah catches the prey, the deep voice of the announcer says: “This is the law of the jungle and nature in Africa”. Next you see images of very cracked hot dusty dry land which has had drought for six months with no rain which is normal for Savannah Zambia. You wouldn’t think this was normal  if you only saw the documentaries.  The elephants, impalas, zebras, wilder beasts, buffaloes are shown desperately looking for water as the small water holes have turned into thick dry mud.

These are the negative images that have dominated the media and TV screens about Zambia and Africa since the very early days of European contacts with Africa in the 1500s. The idea that we Zambians and Africans live in miserable drought for six months of the year is very attractive  to people who live the Northern hemisphere in Europe, North America, Northern Asia, China and Japan. After all it is generally not only cold here but we have both rain and cold dark freezing snow winters. Sometimes freezing rain and frozen ice and snow fall together.

This Western image of six months of misery  contrasted so much with my good life growing up in the village in Zambia that I voiced my opposition to these images of misery in a book I wrote titled “Tit bits for the Curious” that was published in Lusaka in 1989 by the now defunct Multimedia publications. The most difficult times in rural Zambia are the rainy season when there are dwindling supplies of food from the previous growing season, people work in the fields, it is cloudy and sometimes you have mswera which are slow drizzling rains that could go on day and night for a whole week. The dry season in contrast from May to November were known as chihanya among the Tumbuka which means “bright sunny days”.

This was the period when the harvesting was over. Men went hunting. Women molded clay pots, went to the river to bath and took their time scrubbing their feet and washing clothes at the river. People walked to distant villages to visit relatives sometimes travelled to Lusaka or line of rail to visit. Children like me went to dig mice and hunted small birds and animals to supplement meals. We walked bare feet during the hot October sun and caught cicadas. I had forgotten all of the Zambian seasons when I was away from the October heat in North America for more than 20 years and came back to visit in Zambia in October 2012.

I was worried about the heat. The first 2 nights at my uncle’s farm in Chainda in Lusaka,  I was sweating so much during the night I needed a fan. But my body quickly adjusted. I walked in the sun wearing my t-shirts and thin cotton shorty sleeved shirts. My taste of October heat increased each day until I went to visit the Mpika Village of Hope Orphanage run by Ms. Jeny Musakanya. I walked to the market and supermarket every day in Mpika. We drove to the orphanage farms and walked in the bush in the hot October heat and I could hear the sounds of the childhood sounds of the Cicadas. 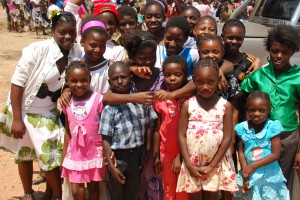 During the 24th October Independence Day in Mpika, I wandered to the nearby football field where the celebrations were being held. There were thousands of people especially children. Frozen drinks and snacks of all sorts were being sold. Some people were sitting under the shades of trees. That’s when it occurred to me; I had forgotten that if you grew up in Zambia the seething October heat is actually sweet. It feels great to see and smell the seething heat and yet  sitting  under a tree there is always a mild cool breeze. It’s even better if you are sipping an ice cold drink or just talking with friends and relatives; what the Tumbuka philosophically call kufwasa; which is sitting quietly contemplating and just taking your time enjoying the moment in whatever you are doing. 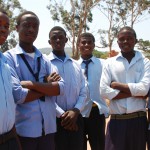 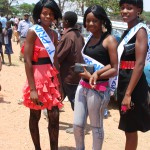 Contestants for the Mpika Miss Independence October 2012 at the celebrations. 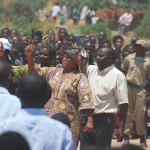 Mpika District top official as Guests of Honor wave and interact with the crowd during the celebrations.