Dennis Liwewe’s  greatest radio commentary in his illustrious career was perhaps the football game that took place at Woodlands Stadium on October 23, 1964. This was twelve hours before Zambia’s independence from British colonialism on October 24, 1964. The old scratchy sounding audio tape of that greatest game was forgotten in the dark back shelves of the then Northern Rhodesia Broadcasting Services, later ZNBC and Zambia Information Services. A patriotic Zambian whisked overnight by air to me the old audio tape for computer digital reconfiguring by the crack team of the University’s Information Technology Center. Since parts of the audio tape have deteriorated over the last 49 years, some parts of the football game are missing with lots of crackling shhhhh transistor sounds.

Dennis Liwewe: Shhhhh…..”Good afternoon to my fellow  2 million Northern Rhodesians who in exactly 12 hours are to break away the shackles of colonialism and oppression to become citizens of the free great and independent nation of Zambia and a new member of the United Nations. I am broadcasting from Woodlands stadium on a bright sunny hot October afternoon. The Zambian side has fielded a team that has the least experience in playing football  as for many years the players were involved in the struggle for freedom. The British Colonial team is fielding their best many of whom are seasoned veterans who have played in top English Football clubs. The Zambians have tremendous heart and determination against the British Colonials team which has all the experience. Starting lineup for the Zambian side is number one Goal Keeper  Grey Zulu, number two the sweeper who is the back bone of the Zambian defense is Munukayumbwa Sipalo…….Shhhh!!!!! [tape breaks away]

Dennis Liwewe: Shhh!!!! “…..Peter Matoka passes the ball to Arthur Wina, Arthur Wina the brother to Sikota Wina passes it to Dingiswayo Banda or “Dingi” the half back. He is challenged and loses the ball to Godwin Hunter of the British Colonials. Hunter passes the ball to Sir Edgar Willimson the midfielder  of the British who quickly picks up momentum. The British are on the attack!! John Mwanakatwe challenges but is beaten, the ball is crossed to Alexender Chambarlain the British left forward who chases the ball to Zambia’s left corner flag. John Mwanakatwe, Dingiswayo Banda and Reuben Kamanga all challenge the intruder. This is a dangerous situation for Zambia’s inexperienced team. Alexander Chambarlain like a magician dribbles the ball and breaks through the cordon of the three Zambian  defenders. Chambarlain has only Munukayumbwa Sipalo to beat!!!! Sipalo slide tackles Chamberlain… the ball bounces out of bounds for Britain’s seventh corner!!!  Ya! Ya! Ya!!!! Britain’s seventh corner!  [Loud uhhhhh!!! From the crowd]. Shhhhh!!!! [Tape Breaks up]

Dennis Liwewe: Shhhhh!!! “……Five minutes before the end of the first half and the score is still zero zero. Chambarlain will take the corner kick from the left side of Zambia’s goal. Goal keeper Grey Zulu has to be alert. Zambia has packed everybody in the penalty box. The corner kick sails above the front of the goal. Sir Roy Welensky heads the ball into Zambia’s penalty area in a dangerous situation!! Commotion in front of  Zambia’s goal area!!!! Away!!! Sipalo clears it away in a dangerous situation!!! ….. The referee has blown his whistle… it is half time. The score is zero zero. Zambia has to regroup if we are to win this game. The front line of Simon Kapwepwe, Kenneth Kaunda, and Mainza Chona have to produce goals. The midfield and Munukayumbwa Sipalo and the defenders have worked so hard to keep the bombarding British at bay for 45 minutes……..”[Break in the tape]

Dennis Liwewe: Shhh!!!!!!    “…….both teams are tired.. it is 40 minutes into the second half and the score is still zero zero. It has been a hard fought game.  Here come the British Colonials again launching an attack. Full back Phillip Limestone passes the ball to Chester Clifford, Clifford to Brandon Bentonbarbour, Bentonbarbour to Sir Edgar Williamson as the Zambians are packing in the defenses. Peter Matoka, Reuben Kamanga Simon Kalulu, Simon Kapwepwe and Kenneth Kaunda are all in the back field to repel the British attack. The dangerous left forward Alexander Chamberlain has the ball as he is challenged by John Mwanakatwe. It rolls out for a throw in to British Colonials. The long throw in lands in Zambia’s danger zone as the British are bombarding us with guns, tanks and the air force and we Zambians have only bows and arrows. Striker Sir Row Welensky kicks the ball over the cross bar for a goal kick to Zambia.  Goal Keeper Grey Zulu quickly takes the long goal kick. The British defenders had moved to near center field!!!!  It is a now a race between Kapwepwe and Kaunda and the experienced British full backs Braxton and Phillip Limestone!!!!!……Kapwepwe is going!!! he is  running with the ball on the left flank towards the British goal and Kenneth Kaunda is running on the right flank towards the British goal!! The British defenders are left behind… Simmon Kapwepwe has only the goalie Bradley Carpenter to beat, Kapwepwe passes the ball to Kaunda …..it’s a g-o-a-l!!!!!!!!!!! Kenneth Kaunda it’s a goal!!!!!!!!!!!!!!  One zero Zambia is leading the British Colonials!!! Kaunda is running around leaping in the air pumping his fist as Kapwepwe embraces him. The team has mobbed Kaunda in a big pile of celebration. Zambia’s reserves on the bench have cleared and run on to the field  to join the team in a wild celebration; Lewis Changufu, Aaron Milner, Sikota Wina, Nalumino Mundia, Justin Chimba, Elija Mudenda including the only white member of the Zambian team James Skinner. Even the youngest player who is only 18 years old Vernom Mwaanga had joined the team on the field!!!![loud deafening noise from the crowd][Break in the tape]

Dennis Liwewe: Shhhhh!!!!! “…..the referee has finally cleared the field…..two minutes to go in injury time of the greatest game ever for Zambia. Zambia leads one zero over the British Colonials. The Zambians  have packed everybody in defense. The referee is looking at his watch. He has blown his whistle. Zambia wins the game One Zero!!!!!! There will be celebrations to day from Kalabo to Mpulungu, from Livingstone to Kafulafuta to Mwinilunga to Chipata…… [tape break] shhh!!!!!!!

Post Script: I had tears in my eyes as I listened to this tape of the great Dennis Liwewe. If ever a country is given a gift from God it is Dennis Liwewe as a gift to all Zambians. As a Zambian who spent many years listening to Dennis Liwewe on those Sunday afternoons, my hope is that when I die, I will go to heaven. There will a football game there between God’s Angels Eleven versus the Chipolopolo Boys or the KK eleven. I will not want to watch the game on TV if there is one in heaven but will instead  listen to the radio commentary of the game by the Great Dennis Liwewe. That will be second heaven to me while I am already in heaven. May Dennis Liwewe’s Soul Rest in Peace.

It was third down and 18 yards. The running back was pulled out. Everyone in the stadium including my dog watching the game on TV at home knew it was an obvious pass play. The ball was snapped. The receivers scrambled deep down field taking a swarm of defenders with them. The defense had backed off a mile leaving the right flank grand canyon open. The quarter back went through a fake throwing motion and then tucked the ball under his arm and scrambled for the long 18 million miles. The 2 nearest defensive backs froze as they realized it was a designed play and steamed toward the quarter back. I was standing three feet from the point of rendezvous near the sideline trying to get the best photo action of my amateur life. As the two goods trains approached horning on the hapless quarterback, I instinctively backed off for my own safety as in a split second I saw and heard a massive earth shaking collision as the three massive colliding bodies landed out of bounds with the target quarter back sprawled on his back. There was a collective ooooh! from the crowd. I had visions of an ambulance. But I was surprised as the quarterback sprung up instantly and ran back to the huddle. The crowd clapped. The team had made a risky an unexpected first down. 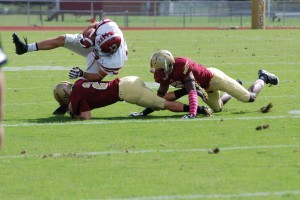 The fall football season is here as thousands of Americans play the game and millions enjoy watching the game from coast to coast from pewee football for small boys, to high school, college and the professionals. The game is so violent that the National Football League has just agreed to pay close to $800 million to pay thousands of retired players for dementia or other brain injuries including concussions they blame on the violent, bone-crunching collisions. In spite all the known dangers, why do men and boys still subject themselves to such a violent and dangerous game?

The explanation and answer for some among the politically correct public may be that men just need to tone down their extreme dangerous testosterone -induced reckless machismo that puts themselves and society at grave risk. But this solution may create even more and worse problems. Although  boys, men, girls, and women may all have a competitive desire, the vast majority of boys and men may have a unique biologically based testosterone-driven aggressive drive that probably reaches its peak between the age of 16 and 28.

This author had a least athletic, puny, malaria and schistosomiasis-tropical disease ravaged body as a boy as a late blooming teenager. But out of the blue at the age of 19 the aggressive drive compelled him in college to try playing rugby and soccer. He even tried boxing for only about 60 seconds. The best thing that happened was at the age of 20, he attended the intense three months National Service military boot camp training with 300 other University of Zambia students. His body and mind were pushed to the limit. As he was being interviewed a few years later by an African-American counselor official to get his visa to come to graduate school, the official asked him if he would be playing American football. The official must have been joking as the author weighed a miserly 120 lbs, and waist size 29.

The concussions and life threatening injuries including the danger of sometimes training in 100 degree dangerous seething heat with hardnosed barking coaches during the football season will not go away. Instead, society and communities should create better legitimate opportunities for everyone but especially boys and men to express their testosterone -induced aggressive drive. This aggressive drive may have helped human communities survive during the earlier stages of human evolution. But that drive will not just go way. If it is suppressed unnecessarily, it may be expressed in other more dangerous, harmful and dysfunctional ways for communities.