Whether you consider yourself an ordinary reader, a well-read citizen of the global world, a highly educated individual who is a Ph. D. holder in the specialized reified air of natural or social sciences in the highest echelons of academia, there is no book that you will read that may result into driving a seismic shift in existing epistemologies and paradigms. This is not mere hyperbole to sweeten the selling of a book. Reading this book gave me the same feeling I had when I first read “The Death of White Sociology” (1973)  by Joyce Ladner thirty-seven years ago when I was a young graduate student. It was the realization that what had been published in respectable academic literature up to the 1920s in America and the Western world as “objective” scientific studies that reinforced deeply racist foundations of Western culture was actually debunked by Ladner as being deeply flawed. The basic foundations of the racist views have not been eliminated since the publishing of that book by Joyce Ladner.

Is this also about to happen to Dr. Carl Hart’s work? Are most readers going to dismiss the book and therefore its powerful new ideas as mere usual grievance ideology to make whites feel guilty about racism and African-Americans and so-called minorities to feel righteous?

Dr. Carl Hart’s High Price: A Neuroscientist Journey of Self-Discovery that Challenges Everything You Know About Drugs and Society, is a story of the most unlikely African American man to become a neuroscientist. He grew up in poverty in a violent dislocated family in the toughest neighborhoods of Miami. But he fought too many odds to become someone least likely to be so: a neuroscientist and tenured Assistant Professor at the prestigious Ivy league Columbia University. So this is a story of an individual rising from rugs to riches, so what? There are perhaps thousands in if not millions of Americans who beat various types of odds and obstacles to achieve the highest positions in the professions they have decided to pursue. What is different about Dr. Carl Hart’s ideas, experiences, and biography? 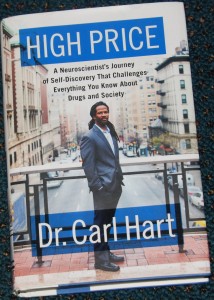 Book cover iamge is the elephant in the room.

It is very easy, in the contemporary atmosphere of political correctness of advocating a color blind society, to overlook the biggest elephant in the room that is right on the front cover of the book. Dr. Carl Hart is not just obviously black or African-American but he is wearing a suit and dreg locks. How many African-Americans who wear dreg locks are neuroscientists? Will the fact of his looks lead the potential readers to dismiss his book and therefore profound ideas? Will the readers wrongly judge the book by its cover? “As my scientific career moved forward, the number of black peers around me dwindled until frequently I was the only black person in the room. When I got my Ph. D. in 1996, in fact, I was the only black man in America to receive a doctorate in neuroscience that year.” (Hart, 2013: p. 221) If my entire argument was about his looks and his low social racial status in our present society, I would not waste my time writing this raving review.

Dr. Carl Hart discusses and exposes the massive misleading hysteria in American society since the early 1900s that wrongly portrayed African Americans as smoking marijuana and becoming high and crazed. While in this drug-induced craze, they would go on violent rampage endangering peaceful white communities especially white women. Except all of these assumptions were never true although they led to American society making marijuana illegal and inflicting stiff punishments on those who broke the law according to Dr. Hart. The actual impact of the marijuana as a drug was never really addressed or scientifically investigated rationally.

Dr. Hart fast forwards to the white powder and crack cocaine hysteria of the 1980s. The media, law makers, and society portrayed the black inner city crack cocaine user as an irrational addict, violent, crazy, and desperate to do anything to get a fix. The consequences were broken black families, high unemployment, rise in violent crimes, and dislocation of the inner city black neighborhoods. Harsh laws were passed against cocaine use that had the unintended consequences of incarceration for longer terms of large black male population while whites who perhaps used even more cocaine were hardly imprisoned. Dr. Hart debunks these myths and argues using his own research in neuroscience and his own abuse of drugs earlier in his youth that, most, if not all the assumptions we make about drugs, addictions, and their impact on African –American neighborhoods in the inner city may be wrong and based on hysteria. He says this might be the case even among the highly acclaimed research by prestigious neuroscience researchers who publish their articles in exclusive highly peer reviewed journal publications. This reviewer asks what good is a highly peer reviewed published research article if the entire foundation and assumptions that undergird the research might he seriously flawed?

“It became increasingly clear to me how prejudices about drug use and our punitive policies toward users themselves made people who take drugs seem less human and less rational. Drug users’ behavior was always first ascribed to drugs rather than considered in light of other, equally prominent factors in the social world, like drug laws.” (Hart, 2013: p. 260)

One of the most profound claims that Dr. Hart makes which will resonate and likely suddenly make so much logical sense to the reader is that any drugs that are introduced among any people, and especially African-American inner city neighborhoods, are done in the context of preexisting social pathology: unemployment, crime, poverty, violence, dislocated families, social isolation, poor schools and education, despair, and hopelessness. People in these circumstances may use drugs not because the drugs themselves cause the social pathology but it may be the other way round. People will use illicit drugs not because of the intrinsic and compelling neurological impact of drugs on the brain, but because individuals who live in and are experiencing debilitating social pathology may find drugs attractive to alleviate their anxiety, hopelessness, social isolation, and alienation. If this assertion by Dr. Hart does not challenge and question our entire epistemology and paradigm about drugs and society, I don’t know what will. The  entire book provide compelling evidence in support of his assertions.

“High price” will perhaps be inspirational to many readers. But it raises many questions as it also confirms many uncomfortable realities of American if not Western society. I find it frustrating that 50 years after the Civil Right Act, Dr. Carl Hart and perhaps millions of African Americans still live troubled lives of poor education, poverty, and rampant racial discrimination and segregation. Large segments of this population may not still be part of the American mainstream and may feel alienated.

I find the book to be so highly interdisciplinary that I recommend it for all scholars and especially teachers of social and natural sciences. If you just read or see the cover this book and dismiss it as “it deals with African-American and minority marginal issues”, you will be making a grave academic mistake. The beauty and strength of this book is that you can extrapolate and apply the ideas to many scientific, social ideas, perspectives and problems. After reading the book you just become a more educated and better informed person.