In August 1969, my father was teaching at Kasonjola Primary school which is 30 miles north of Chipata along the Lundazi Road. I was in Form Three or Grade 9 on school holidays from Chizongwe Secondary Boarding School. My father went to Chipata on a Friday on a shopping trip. When he didn’t return by Sunday, my mother was very worried and concerned. When she did not see him on Monday, she was alarmed and frantic. Being the oldest boy at 15 years old, my mother dispatched me to look for him in Chipata and check with all the familiar relatives. When I returned from Chipata a day later, my father was nowhere to be seen. My mother dispatched me to the village 80 miles away in Lundazi carrying a bicycle on top of the bus. I went to the village to look for my father and inform my grandparents and the whole village that he was missing.

When I returned to Kasonjola, my mother was beginning to grieve and reminisce about what a great time she had spent with my dad and now she was going to the village to suffer and raise us all 9 children alone as a widow through the hard work of farming using the hoe. My mother is the strongest woman I know. She said she was confident my dad was alive though because if he had been killed and thrown in a ditch in Chipata, this fifth day, the police would have known because people would report a decaying body. She was also a woman of deep faith. She had to be. She had been through so much in life.

On the sixth day, a rare vehicle appeared at our rural school and slowly meandered through the school ground toward our house. We kids screamed and jumped up and down with excitement. My mother smiled. Out of the vehicle came my dad and another man his age also about 45 years old, a suitcase and my dad’s famous leather briefcase. The two men had traveled by bus from Kitwe to Chipata. Instead of looking for a ride, they booked a vehicle from Chipata to Kasonjola so they could get home fastest. 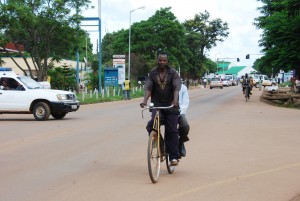 The Kuchona or Long Gone Brother

What unfolded later was this: that Saturday when my father had traveled to Chipata, he had met an acquaintance who had told my father that my father’s brother who had gone to Johannesburg in South Africa in the late 1940s had returned and was in the town of Kitwe on the Copper belt. My father had neither seen nor heard from his brother for about 20 years. The Tumbuka call this kuchona. As my father was about to board a lift  to return home to Kasonjola via Mgubudu Stores that Saturday, a close friend of his who owned a Land Rover said he was heading to Kitwe right there and then for some business. He jokingly asked my father if he needed a free ride to Kitwe? The coincidence and the temptation was irresistible. My father could see his long lost brother. My father was never impulsive. He was a stable responsible family man. He didn’t need to think about it. My father sent a message to someone going to Mgubudu Stores to pass a word or message to my mother that my father had suddenly gone to Kitwe to meet his brother. That verbal message never reached my mother.

My father and his brother Sajeni Tembo brought such laughter to the whole family as we kids excitedly sat around to hear about life in the great City of Johannesburg in South Africa. We kids chased the chicken and my beaming mother cooked the most delicious meal. I have an image of the two men strolling near our house in the evening, quietly chatting, strolling, and they would stop, face each other, and talk and gesture to each other. Then they would both laugh throwing their heads back. My father was so happy. My mother was so joyful.

Sajeni Tembo had married a woman in Johannesburg during the 20 years he was there and had 8 children with her. He wanted to come home to Zambia with them. He could not afford it. He couldn’t travel though Zimbabwe which was still Rhodesia at the time. He found his way through Botswana, catching rides through either Kazungula or Caprivi Strip. He had to use disguises, false stories and forged travel papers at the time because of the tensions were very high between apartheid South Africa, Rhodesia and the whole Southern region. My father’s brother died in the early 1980s in Kitwe. He could never raise money and get travel papers to go and get his wife and children from Johannesburg in South Africa. There are probably grown Tembos, children, and great grandchildren of Sajeni Tembo in Johannesburg who wonder about their Zambian father who disappeared and never cared to come back for them.