I was browsing for Zambian news on the internet when I came across a horrendous story. Some reporter had taken very graphic images of a woman giving birth in the middle of the street in Lusaka. The graphic photos were apparently being circulated on the internet and the local papers to show how incompetent President Rupiah Banda was in handling the nation-wide strike by medical doctors. I was very furious asking myself: “how would any Zambian or let alone a reporter think such a graphic photo that grossly crossed basic lines of ethics and decency was the best way to show that a political leader was incompetent?”

“A reporter for the daily Post newspaper obtained harrowing images of a woman giving birth without medical assistance. Those pictures were circulated. Somehow the images found themselves on my desk and that of the President. One of his private secretaries must have put the envelope containing the photos in the president’s office without alerting him of the contents. He was extremely angry when he saw them. “This is very unethical and unAfrican,” he said as he threw the pictures away.” (Jere, 2014:p. 63) 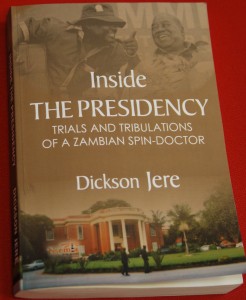 Cover of the book: “Inside the Presidency.”

This is among the many inside stories  of the  challenges and triumphs that the former President Rupiah Banda faced during his presidency from 2008 after the death of President Mwanawasa to 2011 when President Banda lost in a general election to President Sata.

There are many Zambians since 1964 who have worked very closely with former Presidents Kenneth Kaunda, Chiluba, Mwanawasa and Rupiah Banda. Although some of the people may have written some articles, given some interviews and perhaps a book, none have written an inside story. They have not answered the biggest question that most of us Zambians may be curious and ask: “How does it feel like to be the closest person to the President?”

Inside the Presidency: Trials and tribulations of a Zambian Spin-Doctor by Dickson Jere breaks new ground as he is the first Zambian in contemporary times to describe his experiences a President’s closest aid, confidant, advisor, and Spokesman. I found the 23 chapters in the book to be a fast paced quick read. I read it over 2 evenings after dinner in between my heavy teaching work schedule. If you are among the 13 million Zambians who are in the country and especially if you are in the diaspora, this is the book to read to understand one of our former Presidents.

Many readers will come to their own conclusions once they also read the book. I learnt four main things about my country from reading Dickson Jere’s story. First it seems any member of the press can print or publish any serious allegations of corruption or scandals about a sitting President with no judicial, criminal, or court consequences even when the story later proves to have no credible proof.  It seems there is little press accountability for reporting possible falsehoods. Meanwhile, the President or any political leader’s reputation will have been destroyed with virtually no recourse. Second, just as I have always thought, being a President is the toughest job in any country including Zambia. Dickson Jere was very lucky to go on this very thrilling ride to do something that served the public interest of Zambia as a nation.

Third, I was very proud of and became teary eyed about my country of Zambia when President Rupiah Banda peacefully conceded defeat after the elections and handed over power to the new President elect- Michael Sata. President Kaunda had done the same thing in 1991 after UNIP had lost elections to MMD by a land slide.

However, I was very scared when there was political revenge violence soon after the elections. I was tense when Dickson Jere’s house and family was threatened by mobs of youths banging at his gate at 4 hours as they perceived him as the enemy. “But the systematic attacks on MMD supporters increased. They were beaten and their homes looted that whole week following the conclusion of elections”. (Jere, 2014, p. 211) Although the violence could have been worse, violence is something that all Zambians, political leaders and parties should discourage before and after elections.

Fourth, what appears to be unjustified harassment or tormenting of former Presidents by the new government that has just been voted into power has to stop. “The new government carried out sustained negative campaign against the former President since he left office. He was depicted as corrupt man who was involved in several questionable deals with members of his family. The government also threatened to withhold his benefits unless he quit his position as MMD president because the law prohibited former presidents from engaging in active politics.” (Jere, 2013: p.224) Former Presidents ought to retire from politics to travel and conduct national and international diplomacy and peace building.