Why and how did the Machona leave their villages? Where did they walk for months in the dangerous savannah wilderness? Read this book to find the positive and negative impact of this migration.

Yizenge Chondoka, Machona: Returned Labor Migrants and Rural Transformation in Chama District, North Eastern Zambia, 1890 -1964, Lusaka: Academic Press, 2007, pp. 125, $14.00, K72,000.00, Paper.
There was a popular song “A Phiri Anabwera Kucoka Kuwalale” (Mr. Phiri Came Back from the City) by Nashil Pitchen that struck a chord among Zambians that played dozens of times per day on radio Zambia in the early 1970s. . The song describes a Mr. Phiri who left the village to look for a job in the far way city. He worked for many uncountable years without communicating with relatives back home. One day, he suddenly returned home alone with an empty suitcase to find the village gone or relocated , (kusama) and his parents were long dead. Mr. Phiri looked down and stared into the sky. No doubt teary eyed, feeling destitute and heart broken, he did not know what to do. The thousands if not millions of people who migrated from all over their villages in Zambia in search of wage employment in distant cities and stayed away for dozens of years were called Machona. In the book: “Machona: Returned Labor Migrants and Rural Transformation in Chama District, North Eastern Zambia, 1890 -1964,” Yizenge Chondoka, who was a history lecturer at the University of Zambia for more than 25 years, conducted ground breaking research using 200 interviews about the lives of Machona among the Senga people in Chama district in North Eastern Zambia. In the ten chapter book, Chondoka describes why and how the Machona left their villages. How in the 1890s they walked for months in the dangerous savannah wilderness to such distant cities as Lusaka, the Copperbelt, Bulawayo and Salisbury in Southern Rhodesia (Zimbabwe) up to Johannesburg and Cape Town in South Africa. He uses maps to trace the Machona routes from Chama in Zambia and the Southern African region. 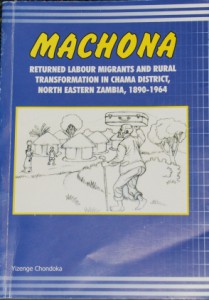 The most interesting descriptions are the motivations for migrations, how the families and the kinship headed by women left behind in the village coped, and what the Machona brought back to the village on their return. The Machona brought change to the village. On page 105 and 108, for example, Chondoka lists some of the dozens of items a married man brought back to the village that included 3 children’s print dresses, 5 women’s blouses, 3 blankets, 11 bars of soap, 1 mirror, 3 saucepans. Some Machona brought back bicycles and used the money they brought with them to upgrade village houses so that some of the homes had wooden door frames and windows for the first time. Besides new material possessions, many of the Machona brought new ideas and social changes about different lifestyles, marriage roles, languages, food including tea, bread, and sugar, farming methods, education, politics, religion, and knowledge about the world outside or beyond the village.

Perhaps the most significant conclusions Dr. Chondoka arrives at after analyzing the data he had meticulously collected is that the positive aspects of labor migration or Machona outweighed the negative aspects. Machona benefited the people in Chama district. His conclusions for the first time contradict or debunk the Eurocentric narrative and economic determinism perspective of most of the Zambian history we learned in school; that labor migration initiated by European colonial industries always had an overwhelming negative impact on the village social, economic, and political organization. What is often overlooked in these main stream Eurocentric historical narratives of the Machona or labor migration is the reality that many Zambians may have been motivated by human curiosity. Beyond paying the compulsory colonial hut taxes, many of the Zambians may have been motivated by human drive and desire to explore, investigate, and experience change.Mbr/> It is a possibility that other future researchers of Machona experiences among the Lozi in Western province, the Kaonde or Luvale in the NorthWestern Province, the Tonga in Gwembe Valley, or Lunda in the Luapula Province may yield different results. But this is where other future researchers could carry out further investigations. There may be parallels of the Machona from the 1890s in rural Zambia to the wave of Zambians who left the country in the late 1980s to work in Southern Africa and in the Diaspora abroad. Are we the new Machona? If so, what do we bring back to Zambia when we return? Will we be like A Phiri who returned to the village alone with an empty suitcase, destitute and heartbroken?

************************************
ABOUT REVIEW AUTHOR: Mwizenge S. Tembo obtained his B.A in Sociology and Psychology at University of Zambia in 1976, M.A , Ph. D. at Michigan State University in Sociology in 1987. He was a Lecturer and Research Fellow at the Institute of African Studies of the University of Zambia from 1977 to 1990. During this period he conducted extensive research and field work in rural Zambia particularly in the Eastern and Southern Provinces of the country. Dr. Mwizenge S. Tembo is Professor of Sociology who has taught at Bridgewater College in Virginia in the United States for twenty years.
Dr. Tembo has authored 4 books: Titbits for the Curious (1989), Legends of Africa (1996), The Bridge (Novel) (2005), Zambian Traditional Names (2006). He is spearheading the building of a Zambia Knowledge Bank Libraries: Nkhanga Branch Village Library in Lundazi District in his native country of Zambia in Southern Africa. He is a weekly columnist for the Daily Newsleader Newspaper of Staunton in Virginia in the USA. He is a frequent column contributor to the Daily News-Record of Harrisonburg in Virginia in the USA. He was also a frequent contributor to the Sunday Times of Zambia in the 1980s. He has published at least 100 newspaper columns. He is a freelance photographer who has sold many of his works. He has written over a 100 articles and research papers which he has published on his web page: www.hungerfoculture.com . For more details: www.bridgewater.edu/~mtembo , www.bridgewater.edu/zanoba Dr. Tembo has also published at least 15 scholarly articles, 21 book reviews, and 10 journalistic articles.
He has just signed a contract for the romantic adventure novel “The Bridge” to be published this year by Linus Publication of New York.