On Wednesday, I came back from work in the evening. When I opened the front door, our white German Shepard dog was right there squeezing her nose against the door as both dogs do always when we come home.  However, Buddy, the other dog, was standing a few feet away with very droopy very tired looking eyes. He had a very slow staggering walk. Buddy would not even eat. He loves to eat. He looked miserable as his whizzy labored breathing got louder.

On Thursday when I got home at 4:00pm Buddy was lying across just behind the front door almost blocking it. He did not even lift his head. I jumped over him. His breathing was terrible. I called the Veterinary doctor to see if I could take him in 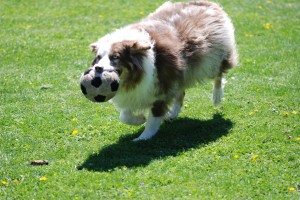 Buddy the dog during happier times playing with the ball in the back yard.

immediately. The doctor had already left for the day. I made an appointment to take Buddy in at 8:45am.

Buddy had not eaten for two whole days. There were two good pieces of nice chicken in the fridge. I cut them into small pieces and warmed them in a pot and made some gravy with it. I have been told a million times that people food is bad for our pets. I added this to his dry usual bowl of food. I put the plate right up to his nose as he lay there. Suddenly, he lifted just his head above the bowl and ate the food. That was to be his last very good meal.

Buddy liked to ride in the car. I winded through the back road of the beautiful Shenandoah Valley before arriving at the clinic. The doctor showed me the X-rays that showed so many things wrong including an enlarged spleen, enlarged heart, high fever, and many spots on his lungs including arthritis in his bones. The doctor said he could not say if any of it was cancerous. The prognosis was not very good. His breathing was so loud it was like a broken whizzing vacuum cleaner. I felt awful for him. He was suffering and about 15 years old. We got the dog when my mother-in-law passed away in 2008.

I was there lovingly patting his head as he closed his eyes and that terrible heart wrenching horrible  whizzing loud breathing for 2 days was suddenly gone. Buddy was put to sleep. Buddy the Australian Sheep dog was not suffering or in pain any longer. I had a feeling of great relief but also grief. Later I sent an email to the long list of family members to inform them of Buddy’s passing. Why do we love animals?

In January 2008, our family Beagle mutt that our 6th grade son had adopted from our local Society for the Prevention of Cruelty to Animals (SPCA) died after a short illness due to old age and perhaps natural causes. I expressed my grief in a column in our local paper. A few days later I received a hand delivered blistering 3 page hand written letter from a man who was behind bars in our town in Harrisonburg. He berated me for wasting column space and possessing poor intellect in expressing my grief over a pet. Didn’t I know Americans spent $43.2 billion on their pets when millions of people are starving and live in dire poverty? Wasn’t I aware of American and European imperialism and aggression that inflicted injustice, caused wars and conflict in the Congo in Africa and elsewhere? Did I know who the radical Malcolm X was? He expressed contempt for my views since in an earlier column I had expressed some positive sentiments about conservative black American Supreme Court Justice Clarence Thomas.

My critic had been in and out of prison for several years. It was apparent he did not know who I was, my history, what I knew, and what I had experienced in life. I did not respond because growing up I was taught not to hit a man when he is already down.

In my humble opinion, from Kafulafuta, Gwembe Valley, Mpulungu, Lusaka in Zambia to America, Russia, Europe, Japan and the whole world,  we love animals because the same very powerful love we have for other humans is exactly the same love we have for animals. This simple explanation is probably the most powerful reason we should love and treat all animals kindly.