They couple had dated for 18 months when they decided to get married. She loved him and he often said she was his angel. But that was when he was in a good mood. He was verbally and physically abusive. She ignored the verbal abuse as part of his expressing of the deep love for her. She convinced herself that the two times he had shoved and slapped her with an open palm was really mild. She was very sure that he would change as soon as they got married after the big wedding in 6 months.  Extensive research suggests that an abusive spouse never stops after marriage. To the contrary the abuse gets 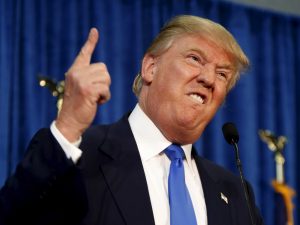 worse and some spouses end up in the hospital and sometimes even worse as victims of murder after the marriage.

So it is that the nation may have just decided to marry an abusive spouse in electing President- Elect Donald Trump. All the signs of an abusive spouse were there. The candidate did not hide them. He never used the so-called dog whistle. Instead he used a megaphone. Donald Trump announced his candidacy on June 15 2015 by insulting Mexican Americans who sneak across the border as drug dealers, thieves, and rapists. Racial bigotry, banning Muslims, xenophobia, the White Nationalist support, Ku Klux Klan, you name it, Trump has done or condoned it or looked the other way. During the 18 months the whole nation has had to endure one outrageous insult after another. His bullying of the 17 political Republican Presidential candidates rivals during the debates and campaigns during the primary elections was horrible.

The 65,527,625 people who voted for Hillary Clinton are the relatives on both sides of the family who objected to America marrying Trump because they had seen the abuse. The 62,851,436 who voted for Trump are the relatives who believed the groom Trump would change after tying the knot. They believed the bride when she dismissed the verbal abuse and claimed the physical slaps were mild and just part of a love relationship.  The 90 million or about 46% of the people who did not vote were the relatives who were too busy, indifferent, or  just  had a blast at the wedding. They didn’t care.

Now that the wedding is over and there are no signs that the spouse Trump is changing his abusive behavior, everyone is very tense and nervous. The Trump supporter family members are pleading to give him a chance and that he will now change once he is sworn in as President on January 20. Some of the family members who opposed the marriage are already saying “we told you he is a monster!”

Most abusive relationships don’t end well. But for the sake of  America, we should all just pray this holiday season for divine intervention in this already tumultuous marriage between America and Donald Trump.