When I was a child living at Chipewa Village in the late 1950s in Lundazi District in Eastern Zambia in Southern Africa, we were loudly playing children’s games including hide and seek. I was jumping and running around in the evening after supper with other children in the open village square. Adults congregated in front of houses and chatted around with household family members getting ready to go to bed. Suddenly from nowhere a massive very bright light descended directly on top of the village momentarily making everything look as bright as day light. Suddenly the light went off 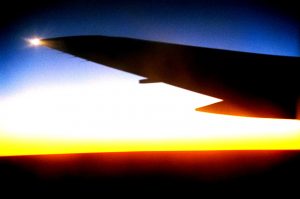 Beautiful sunrise about to land at Kenneth Kaunda International Airport in Lusaka in Zambia. Did God Create the beauty and the plane?

and it was dark again. We all screamed running in different directions to our various homes. Out of breath my cousins and I asked my grandparents what that scary bright light was. My grandmother calmly replied that it was the wretched work of witches in the night.

Neil deGrasse Tyson Astrophysics for people in a Hurry, reminded me of this incident that I never witnessed again in my life. But I might have seen again and again but more on this later. In the village I attended Sub A or Grade One at Boyole Primary School. The very first religious knowledge class taught me about God, the origin of humans and the crucial role of  Adam and Eve in the fate of all humanity. Ten years later in Form 4 in 1970 at Chizongwe Secondary School in Chipata, I was to learn about Sir Isaac Newton’s Law of Gravity (1642-1726) in physics in my Physical Science classes practicing the formula. Although in 1915 Albert Einstein’s discovered the very influential Theory of Relativity, I don’t remember it being in our physics textbook yet in 1970. How is all this related to Tyson’s just published new book Astrophysics for people in a Hurry? How is this related to whether God exists?

Astrophysicist Neil deGrasse Tyson in the very first sentence of his book reminiscent of the Bible says: “In the beginning, nearly fourteen billion years ago, all space and all the matter and all the energy of the known universe was contained in a volume less than one-trillionth the size of the period (full stop) that ends this sentence.” (p.17) “What!!??” was my reaction after I read the first sentence. Then there was the Big Bang. I could not stop reading until I finished the 208 pages because I wanted so many of my own questions answered. 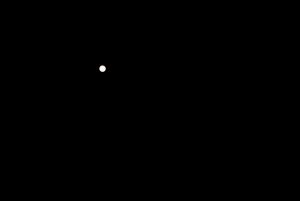 The moon in the night sky in the village.

Tyson goes on to describe the origin of the known Universe, distant galaxies, the famous Milky Way, stars, our solar system, matter, energy, and how the Earth may have become the only known habitable planet in the solar system. Tyson describes photons, atoms, molecules, constants, conservation laws, speed of light, the mystery of dark matter, cosmic distances; all without using any of the sophisticated mathematical formulas in physics. That’s why the book is for the lay person because even a non-Astrophysicist like me with some physics knowledge from secondary school was able to read and understand it.

What invokes questions in the book about whether God exists is the sheer unimaginable monumental events that have happened over 13 billion years and will continue to happen going into the future. All of them appear or are said to happen or have happened by chance. For example, the orbit along which our mother earth rotates around the massive hot sun happens to be just further enough from the sun that we do not burn but instead have incredible forms of life from tiny bacteria, insects, and trees to humans, elephants and to one time humongous dinosaurs. The sun’s energy through photosynthesis creates oxygen through plants. We humans and many other of the earth’s creatures need oxygen to live. No other planets, at least in our solar system, have these qualities that support so much life. Had our Earth been nudged just a little further away from the sun in our orbit several billion years after the Big Bag, the earth would be too cold to support our life.

Think of Your Origins 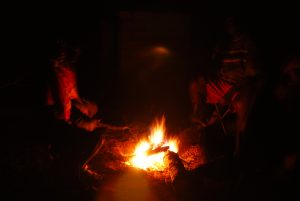 Enjoying the fire in the village. What is the relationship between fire and the speed of light?

If you are a Zambian living in the village,  Lusaka, Kabompo, Gwembe Valley, and Livingstone and where ever you are, once you have eaten nshima with good relish, you are not necessarily rich, but you are comfortable, life seems good, shouldn’t you take a moment to think: “What was there before the Big Bang? Where did I come from? Why? What is Earth? How big is the Universe? What about the moon, heaven and all those thousand and millions of stars at night? Where did they come from? What is my role in the Universe? What is light or fire?” This book will give you some answers. But it will not give you the answer to the question: “Does God exist?” You will have to make up your mind after you read the book if you have not made up your mind already. About that bright light in the village? I now believe it might have been a shooting star or meteorite that was headed toward our village but combusted or burned up and evaporated into gas in the atmosphere perhaps 10 Kms high above our village. I have seen thousands of shooting stars especially even today when I visit the village and look at the bright moon and mesmerizing twinkling stars.