In 2008 I got a frantic call from a close Zambian friend who lives in Chicago with his wife and two children in a typical middle class neighborhood. His 19 year old son was attending college and went to a party near campus with a group of friends. During a race-related fracas at the party, his son was severely beaten and had to be taken to hospital. Once out of the hospital, the son was back home and deeply depressed. His depression was so severe that he would be in bed all day and not come out of his bedroom. He would not eat much. 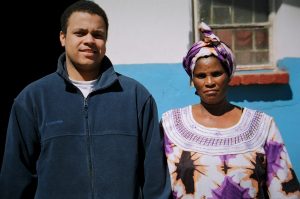 Taking anti-depressants was not helping. Did I have any suggestions?

I advised my friend that they should immediately fly back home to Zambia in Africa. I gave them the name and cell phone number of the reputable traditional healer who lives in the Chawama compound South of Zambia’s  Capital City of Lusaka. The wife boarded the plane for Zambia with their son. As soon as they landed at the Lusaka Kenneth Kaunda International Airport, they booked a taxi and headed straight to the traditional healers’ house. This was an urgent matter and there was no time to waste.

The traditional healer prescribed several types of treatment for the depression which included a pile of roots. These were to be soaked in water. The mother was to use the herb from the soaked roots to boil a thin maize or corn meal porridge. Her son had to drink this porridge 3 times a day for 3 months. She and her son soon after travelled north of the country to the Copper belt where they stayed with close relatives and other extended family members as he underwent treatment. During the process her son was able to eat delicious nshima meals with good ndiyo, umunani or relishes which the whole family ate together three times per day as is the traditional Zambian meal eating custom. Her son laughed, joked, played, and talked every day in the Zambian language with his aunts, uncles, 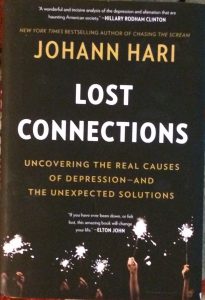 nephews, nieces, cousins, and many  others. He shared bedrooms with his cousins. After a month, they returned to Illinois where her son continued to cook and drink the herbal porridge for another month.

How did I know this traditional healer might be able to treat the son’s deep depression? It is because my own son eight years earlier had dropped out of college as a sophomore because of depression. Counselling and other therapy did not work. The antidepressants had such horrendous so-called side effects that my son exhibited suicidal thoughts. That’s when I urgently had also flown to Zambia to the same traditional healer in Lusaka. I went beyond that to the village where my son consulted another traditional healer.  Is my argument that Western doctors and the powerful pharmaceutical antidepressant drugs don’t work for treating depression? Am I advocating that every reader who has depression board a plane and head to Lusaka Zambia or to any African country from Cairo to Cape Town? How is this related to the book “Lost Connections”?

I have personally experienced some depression. I have seen it in close family members the last 58 years since I was a child growing up in Zambia in the 1950s. I saw and have seen how depression was treated in traditional Zambia. I am keenly aware that depression is a rampart and destructive of lives both young and old in contemporary America and in societies in general. After reading all the 321 pages in Johann Hari, Lost Connections: Uncovering the Real Causes of Depression – and the Unexpected Solutions, I was able to more explicitly realize the connections between the dots about depression that I could see in both my personal and academic life that I was suddenly able to see and make the connections.

There are three possible ways to read and look at the proposed approach to causes and solutions to curing depression proposed in this book. First, you could entirely avoid reading the book because you might think it is too long. Instead you could read small tidbits of reviews, a few hundred-word short critical commentaries that either praise or 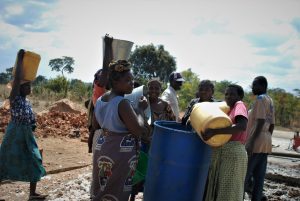 Meaningful work may help prevent or reduce depression. Women drawing water during the construction of the Nkhanga Village Library in Lundazi in Eastern Zambia.

criticize the ideas in the book. Second, you could read it for theoretical knowledge so you can use it as ammunition in academic discourse which often mimics combat. Third, you could read it with serious urgency because depression and anxiety are so wide spread in our society you may be trying to be part of the search for serious solutions. I decided I want to read both for knowledge but also to determine if I might be able to draw from my traditional Zambian and African experiences in order to be part of finding some long term real treatment and solutions. What Western societies are doing right now in their approach to causes and treatment of depression may not be working.

The American author of the book Lost Connections battled depression from a very young age when he was a teenager using antidepressants which never worked. But he endured horrendous side effects from the antidepressants while being convinced they were beneficial in curing his depression. He did not know it at the time that the antidepressants were not working. The 22 chapters of the book of 321 pages are divided into 3 distinctive parts. Part I is “The Crack of the Old Story” which are very significant first 55 pages of the book. He exposes and debunks the myth that has been very deeply embedded in us that science and drugs that are promoted and believed to fix our brains when we have depression have not only all been mistaken but may be lies to put it plainly. Drug companies may be very complicit in continuing to perpetuate this lie.

“People are told that drugs like antidepressants restore a natural balance to your brain, she said, but it’s not true – they create an artificial state. The whole idea of mental distress being caused simply by a chemical imbalance in “a myth” she has come to believe, sold to us by the drug companies.” (p.30)

Part II of the book addresses in detail the “Nine Causes of Depression and Anxiety” which are said to have caused serious and harmful disconnection among humans in contemporary society. The causes include: Meaningful Work, Disconnection from other 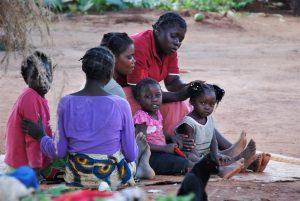 people, lack of Meaningful Values, Childhood Trauma, Disconnection from the Natural World, the Role of Genes and Brain Changes.

Part III of the book explores “Reconnection. Or, a Different Kind of Antidepressant” which includes such topics as Reconnection to Meaningful Work, Meaningful Values, and Reconnecting to Other People.

Each reader will encounter perhaps many significant ideas about depression in “Lost Connections” that they may agree or disagree with. But what I found most gratifying was Hari’s statement which reaffirms my own preexisting beliefs and convictions all along which I first expressed in my opposition to some of the earlier methods of research and controversy about the HIV/AIDS in the 1980s. A man is walking long a dark street and loses his keys and begins to look for them. Another person notices that the man was looking for his keys not in the part of the street where he might have lost the keys. When the man who lost the keys was asked why he was looking for his keys not where he might have lost them fifty yards away, the man replied: “Because this is where there is a street light”. That man was never going to find his lost keys.

Reaffirming the validity of the lost key analogy, about depression Hari says: “Because we have been framing the problem incorrectly, we have been finding flawed solutions. If this is primarily a brain problem, it makes sense to look for answers primarily in the brain. But if this is to a more significant degree a problem with how we live, we need to look primarily for answers out here in our lives……It seemed clear that if disconnection is the main driver for our depression and anxiety, we need to find ways to reconnect.” (p.161)

This author realized that Hari’s advocating reconnections brings contemporary modern society full circle to the significance of life in the African Savannah village from where all humans evolved and migrated perhaps forty thousand years ago. I characterized the deep human connections reflected in the traditional Zambian and African village as: “Heaven on Earth” in my book Satisfying Zambian Hunger for Culture.(p. 21-23). In order to find lasting cure to depression employing the holistic approach may require humans to adopt the African Savannah lifestyle we may have abandoned perhaps about ten thousand years ago.

Discussing why loneliness may cause depression and anxiety, Hari says: “Human beings first evolved on the savannas of Africa, where we lived in small hunter-gatherer tribes of a few hundred people or less. You and I exist for one reason- because those humans figured out how to cooperate.”(p.77)

What is most appealing and meaningful about the ideas in this book are its holistic and historical approach. Several times in the book he mentions that all of us 7.7 billion people came from the open Savanna in Africa. Could rampant depression be related to virtually everyone reading this evolving from the open Savanna may be forty thousand years ago but now living in what might be cages in isolated houses, offices, factories, hostile and alienating work places, the internet virtual world, tiny apartments or flats while being 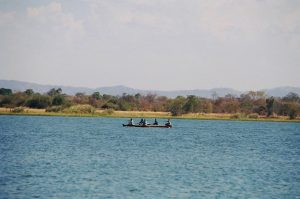 Nega Nega Hills overlooking the Kafue River. Open spaces in nature like those in the Savanna may help eliminate of reduce depression.

increasingly disconnected from other humans?

Some social scientists conducted research all over the world to find out what physical environment people have a liking for. “What they found is that everywhere, no matter how different their culture, people had a preference for landscapes that look like the Savannas in Africa. There is something about it, they conclude, that seems to be innate.” (p.129) The premises and references to the Savannas in Africa in the book validated why I have a deep love, fondness, and even a spiritual connection to the Savanna wilderness I am fortunate and blessed to have grown up in 58 years ago. This book provides credible causes and possible solutions to depression but the challenges of adopting those solutions are daunting. But he provides some optimistic recommendations and encouragement at the end.