The popular wide spread belief that is reminiscent of the Western intellectual pursuits, cultural arrogance and hubris has been the typical characterization of the African villager and persona as a noble savage. Much of Western intellectual pursuits since the period of enlightenment in Europe, after the Industrial Revolution, and during European colonization of Zambia and Africa still harbor the idea that there can be no credible intellectual let alone legitimate philosophical world view coming from a primitive African villager’s experience. The majority of our Zambian and African intellectuals have unwittingly adopted this ill- 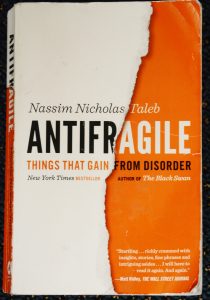 Antifragile: Things that Gain from Disorder

informed derogatory perspective. To my utter pure surprise that carried me on the shoulders of relief peppered with elegance, this book helps debunk this myth in my village humble mind. Since the saying that there is safety in numbers and Talib seems to have emboldened me as he has led the way, let me be an unusually more frank, bold and aggressive about what I mean.

I grew up in the Zambian village in the late 1950s when my life was totally and deeply embedded in the Tumbuka African culture and especially language. Then I went to school and was exposed to the very aggressive Western civilization through Tamanda Upper Primary Boarding School in rural Chipata, Chizongwe Secondary School in the 1960s in Chipata and University of Zambia in the 1970s where I majored in Psychology and Sociology. In the 1980s I attended graduate school in the United States where I obtained my Ph. D. Since my earliest exposure to ideas as a young child in the village, I have always had what I can characterize as a contentious intellectual mind. I would not call it a critical mind which is a preferred somewhat popular academic cliché  which implies a certain trained Western inspired formality in my thought process.

Western ideas then and now always internally clashed with what I regard as my equally legitimate indigenous ideas or epistemology from my Zambian or African Tumbuka culture. In my whole life of over six decades, I don’t remember both my physical and intellectual world view ever being monolithic. This is one of the many reasons why my Professors or Lecturers as an undergraduate at University of Zambia may have considered some of my performance as never good as each assignment represented an unusual internal, perhaps in the view of the lecturers, the undisciplined battle of intellectual world views of the inferior Zambian traditional culture and the intrinsically superior rational empirically tested Western or Eurocentric epistemology. This may have been also true in graduate school. I did not understand this at the time.

You can imagine my great relief and utter joy when I read this book many decades later in 2017. The numerous ideas in “Antifragile” perfectly suited my intellectual persona and the validation that all those clashing and contentious ideas I have encountered, harbored, and  deemed unsuitable for any academic journal were not a misnomer, backward, undisciplined or primitive. In fact I was the ultimate antifragile Zambian Tumbuka intellectual. But I am getting ahead of myself with righteous exuberance.

The Essence of Antifragile

In the book, Antifragile: Things that Gain from Disorder, the author Nassim Nicholas Taleb describes something that probably every human who is young and old in every culture might have been aware of, and probably lived or is living through but did not have a word for it in English. If they had a word for it, it was probably not in English but may be in Tumbuka in my case, but may be in any of the 72 Zambian indigenous languages.

“Some things benefit from shocks; they thrive and grow when exposed to volatility, randomness, disorder, and stressor and love adventure, risk, and uncertainty. Yet, in spite of the ubiquity of the phenomenon, there is no word for the exact opposite. Let us call it antifragile. Antifragility is beyond resilience or robustness. The resilient resists shocks and stays the same; the antifragile gets better. This property is behind everything that has changed with time: evolution, culture, ideas, revolutions, political systems, technological innovation, cultural and economic, corporate survival, good recipes….rise of cities… equatorial forests, bacterial resistance…..” (p. 3)

As soon as I read these sentences and deep into reading the 519 pages, my fertile intellectual mind went into over drive to test the validity of these propositions. As I have done over six decades each time I encounter new ideas, I immediately wanted to test or validate this idea of antifragility first through applying it to myself, my village experience, the Zambian society and then to the world at large.

The Structure of the Antifragile

It would be disingenuous if I did not warn the reader that this is not your typical new book with a systematic simple what today might be called transparent chronological narrative. Why should all ideas be simple and transparent? I ask. This was very deliberate on the author Talib’s part. The down side is that many readers may say his work is too random, dense and chaotic to make any sense of his ideas. The upside is that this is precisely the strength of the book. The book has 25 Chapters with a smokers board of meaningful topics and vignettes. These include some history of philosophy including Aristotle, Plato, paradoxes of disorder, crucial role of stressors in life, contradictions of modernity, and weakness of the bell curve in statistical associations. There are 7 books within the book: Book I – The Antifragile: An Introduction, Book II – Modernity and the Denial of Antifragility, Book III – A Nonpredictive View of the World, Book IV – Optionality, Technology, and the Intelligence of Antifragility; Book V – The Nonlinear and the Nonlinear; Book VII: The Ethics of Fragility and Antifragility.

The physical environment I grew up in had tremendous biological stressors. This was before the wide spread use of Western medicine and vaccinations. I survived mumps, whooping cough, rubella, diphtheria, and lived with and within nature and all kinds of bacteria and viruses. I endured many years of schistosomiasis or bilharzia. These biological stressors may have made my physical health antifragile as opposed to fragile or just being robust. A whole school of over 100 children took the small pox vaccination in 1960 at Boyole Primary School in Lundazi in the Eastern Province of Zambia. I have wondered in the past about the impact of whole sale introduction of Western medicine. The ideas in this book made me continue to wonder whether Western medicine made the bodies of the Zambian population so fragile that we may have become an easy victim of HIV/AIDS virus. Just a thought.

My home villages, perhaps some of the many thousands of villages in Zambia, have survived close to may be a 100 years as many of them may have been established after the 1890s. The fact that some still exist today with many changes they have 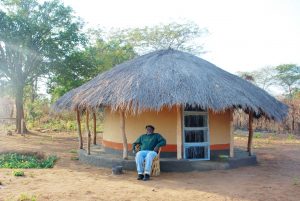 Mwizenge Tembo in front of his village hut.

endured might mean they are antifragile. They have undergone the stresses of population growth, migrations of men to cities, conflict and dispute between clans, introduction of innovations, British colonialism,  new values and changing customs including Christianity and in some cases Islam. The villages that disappeared may have been fragile and the ones that have survived may be antifragile or robust.

According to Talib, these are major life changing events we claim we can predict but we cannot. The events are random. We just have to be prepared as individuals, as a nation or society to respond to and in many cases take advantage of Black Swan events.

The ideas in this book validate what I may tacitly have already known, open some new frontiers in epistemology, and excite me beyond any superlatives that I am writing right now. Although Talib discourages predictions, my deep understanding of this book and Talib the thinker is that his ideas explain so much that his ideas will create a seismic shift in knowledge. I know it has validated the massive amount of my experiential and theoretical knowledge I have acquired the last six decades. In fact I have been so inspired by Talib’s deep philosophical ideas that I have done something very unusual. I have sent copies of his book to five Zambians with the idea that we should begin to exchange some serious philosophical thoughts of our own that we have had for a long time.  I can cite numerous examples that question some of the assumptions we have wrongly made in life based on our modernity-induced recent ignorance of antifragility and the insidious effect of modernity.

Historians and popular historiography are both severely criticized and some of the approaches of historical narratives challenged and debunked. It is up to the reader to extrapolate on some of the ideas in Talib’s book. Some of those who believe in the statistical Bell Curve, Bankers, financial investors, and predictions from some social scientists like myself will be disappointed. Development planners and predictors may not like what Taleb exposes: that most of us may be phonies but we just don’t know it. I agree with Taleb because I have been involved in international development planning projects since the 1960s; and so have millions of my other fellow social scientists some with numerous Ph. Ds. Some of the projects like immunizations may have obvious rational positive outcomes. But the rest have at best dubious development outcome about which Talib invokes the expression “lecturing birds” about how to fly. Social scientists and even medical treatment naive interventions may have at worst bogus or even harmful outcomes. I agree with Talib’s ideas so much that each time I read a page of the book, I kept asking myself: “Where were these ideas when I was writing my Ph. D. Dissertation 30 years ago?” I come away thinking I should revise most of the material I have written in some of my books over the last 30 years. This is how powerful this book is and especially most of Talib’s thinking.