I must have been about seven years old. My dad had gone out of town on business riding his bike through sixty miles of dangerous desolate wilderness in Luangwa Valley of the Eastern Province of Zambia in Southern Africa. At that time there were fewer people but many wild animals everywhere. He had travelled to Fort Jameson (now Chipata) on business from Chasela Primary School where he was a teacher. My mom asked me to leave my bedroom and instead to sleep in my dad’s bed since we were by ourselves that night. It was 7:00 pm and the yellow paraffin or kerose  lamp was burning and flickering on mom’s small bedside table. My mom had just finished giving my seven month old baby sister, Ester, a bath. Ester was whining and fussing with mom bugging her to apply the Vaseline on herself. My mom was saying no and will she please go to sleep when all of a sudden:

“Aaaaaaaaaargh!!!!!!” One lion roared with the deepest bellow literally five feet outside our rickety bedroom door and window. 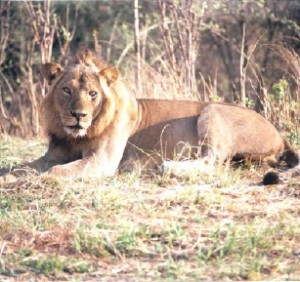 My mom hastily blew out the kerosene lamp. My sister tried to dive under mom to hide. I was so scared I could not move to hide under the covers. My little heart may have stopped. The plates, dishes, pots, and pans rattled on the kitchen shelves as some crashed to the cement floor in the kitchen. Some rats fell with a thud from the grass roof. The two lions continued to roar in tandem.

There was loud commotion in the nearby Chibande large village as playing children screamed and fled in terror. Mothers desperately yelled calling their children by name to please run home. Most kids ran into the nearest house for cover for that night as there was no time to run to their parents’ house.

My mom and I did not get out of the house well until the sun had risen up to nine hours the following morning. First, my mom prayed to God for having saved our lives that night. She then gingerly opened our small wooden bedroom window and carefully peaked outside to make sure the lions were not waiting anywhere outside. That’s when we walked out of the house.

The terrible memories of that night decades ago in Zambia came back because of a book a work mate had given me to read. Coincidentally, my car broke down over the weekend and I could not go anywhere. I read the 275 page Philip Caputo’s “Ghosts of Tsavo: Stalking the Mysteries of Lions of East Africa” in one day.
“The Ghosts of Tsavo” rekindle both the terror and deep mystery that man-eating lions still invoke in history and contemporary times on the African continent. The book is an adventure thriller that offers convincing insights into how and why some lions stalk, kill, and eat human beings in a shockingly brazen fashion. Some parts of the book are shocking and brutal in their detailed descriptions.

In “The Ghosts of Tsavo” the saga of the Tsavo man-eating lions happened in the late 1890s in East Africa. But I was surprised about a similarly shocking episode described in the first opening chapter of the book of a man-eating lion in Mfuwe in the Luangwa Game Park as recently as 1991. This episode is much closer to home. I lived in the area with my parents in the 1950s when I had the closest call with lions. I have since then visited the Luangwa Game Park in Mfuwe several times and as recently as July 2009.

The book has three major themes: First, the details of the adventures, investigations, the research and the sheer thrill Caputo experienced in actually visiting many of the places in Africa where man-eating lions still exist. Second, the conflict, tensions, and ambivalence Caputo exposes between human beings, tourism, the mysteries of lions in the African natural habitat, and wild life conservation. Lastly, Caputo explores some of the scientific evolutionary questions that still have to be resolved about the relationship between man-eating lions and their status in the Darwinian evolutionary process.

The detached average reader whose closest encounter with a lion may be the docile lion in the local zoo, may not fully appreciate both the terror and sheer mystery man-eating lions evoke. The “Ghosts of Tsavo” is both thrilling and educational. The book made me relive some of the old memories including the family legend of my grandfather who was mauled to death by a man eating lion in 1941 in our home village in Lundazi. That is another story.

**********************
[I met my kid sister Ester on August 2 2009 at the Arcade Shopping Mall in Lusaka. The thing with younger siblings is that one can’t believe they can get older. She lives in Sinazeze in Southern Province on the bank of the Kariba Dam with her husband and their now grown childrnn. We had such a great time for two hours laughing about old times. We had last seen each other over 20 years ago, in 1989. She made an effort to travel so that we could see each other before I returned to the States. It was such a blessing to see her and for her to meet her nephew. i.e my son.