Late in the afternoon as the sun was about to set, two exhausted dogs with small bloody scratches all over their faces, and still breathing very rapidly with their tongues hanging out emerged out of the bush into the village. They immediately propped down in the shade. More dogs came emerging out of the bush. The men’s voices could be barely be heard at first. Then their deep loud voices got louder as they came closer to the village. The men each slowly emerged from the bush into the village.

Each of all the men was carrying one animal or more on their shoulders; cousin Kanthaulo was carrying 2 kalulu (hares or rabbits), cousin Njenje was carrying 2 sezi, my grandfather Mchawa was carrying nyiska or insa or a duiker on his shoulder. Men were carrying 5 tungwa, 3 insa, many sezi, many tondo (big mouse), ngulube (wild pig), gazelle, mnjiri (warthog), some birds including a nkhanga (guinea fowl), and many small animals I did not recognize. 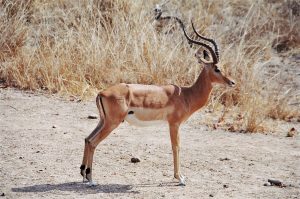 The men assembled at the mphala or insaka lifting off their shoulders their kills.

We the boys including my cousins excitedly followed the men to the mphala. As they put down their kills, they told us to get many broad masuku leaves from the bush nearby. These were laid down covering the ground on which the animals were going be skinned. The men made 6 fires. Our biggest job as young boys was to help the men skin the animals. We were asked to hold the leg here, pull the leg away or closer as the me sliced their skins away using sharpened knives. Axes were used to break the bones. 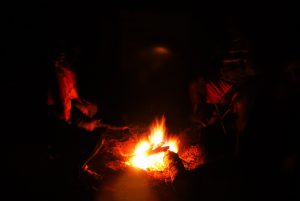 The men made 6 fires at the Mphala

continued to slice some pieces of meat.

“Put these 2 pieces of meat on the fire. This one is yours and this one is mine. Keep an eye on them as they cook so they don’t burn. Once they are done, we will eat them.” The men tossed some of the meats and bones to the dogs that were attracted to the smell of the meats as the dogs were lurking and waiting on the edge the mphala as they sniffed around. 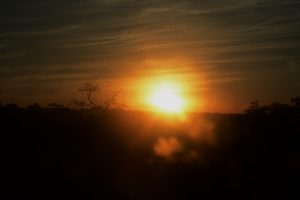 Before sunset the men returned

Once I finished helping Uncle Gowokani, Agogo (grandfather) Mchawa called me for help. He also put 2 pieces of meat on his fire; one for me and one for him. The men were talking and laughing about the hunt and teasing each other about the various incidents and adventures during the long day hunt. They said that was a long trip deep into the utter remote wilderness down in Chizingizi area. They said there were so many animals there since virtually no humans lived there all the way down to the Luangwa River.

“Mwizenge,” Uncle Mzimphu called. “Take this plate of meat to your Apongozi (aunt) aNyaMchulu. Tell her to cook this ndiyo (relish) for nshima tonight. Wendeske!! (hurry up).”

Holding and carrying the plate of meat carefully, I hurried to aunt NyamMchulu. Like all the women had done that day, she was ready. The fire was burning, the pot was clean and ready to cook the special meal. I run back while taking small bites an savoring the roasted meat I had skillfully carried with me in the corner of my hand from the mphala.

That evening, my cousins and all the young boys were running, hurrying excitedly, crisscrossing the village in the evening

darkness delivering fresh meat to all the women of the village who cooked the meat immediately. They young girls were also learning from their mothers, grandmothers, and other adult women how to prepare and cook the meats depending on the type of animal.

Later that evening over 20 nshimas arrived at the mphala with different types of delicious ndiyo (relishes) of different types of wild animal meats. The men gave us 5 nshimas with relishes or ndiyos for us 10 boys to eat. Some of the meats were fresh roasted from our own fires from the mphala. Everyone in the whole village that night, men, women and children ate nshima with delicious meats. It was a memorable feast that I have never forgotten and will never forget for the rest of my life. 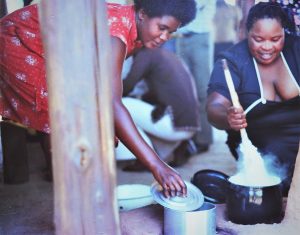 Since all the fresh meats and food get bad in two days if they are not eaten in the village, the following day the men did something special. They built small raised racks from small branches from trees. They sliced the rest of the wild meats. They built fires under the small racks. They salted and dried the meats over the fire for 2 days. Once they were dried the meats were stored away to be cooked in the months to follow.

The last chisokole hunt has been memorable for me and I remember it with great nostalgia as if it happened yesterday. The following year, I couldn’t go as my grandmother NyaMwaza had promised because I went to school for Sub A or Grade one at Boyole Primary School. School was the beginning of Westernization or Europeanization that took me away and forbade me from participating in my precious African culture. Today I ask why is that type of hunting being regarded as primitive? Why was Western culture imposed at the expense of or obliterating my Zambian or African culture? Some will argue that Western technology and education taught me how to read and write, speak English, to be civilized, saved me from dying from malaria, whooping cough, typhoid fever, small pox, and other deadly childhood diseases. Should really the price of this have been obliterating my or our Zambian and African culture?

**If you loved this story, this author published “The Bridge” a highly acclaimed romantic thriller novel in 2005 that reflects deep aspects of our Zambian culture. The Ministry of Education Curriculum Development CDC) in April 2015 approved or accepted the book to be used as a supplementary reader for grades 10 – 12 in the Zambian Secondary School Literature syllabus. An application was filed with the Zambia Examinations Council for the book to be adopted by Secondary School in June 2016. Please kindly contact Zambia Examinations Council to urge them to adopt the book.