The Zambia Knowledge Bank Libraries: Nkhanga Branch (ZANOBA) in Lundazi in the Eastern Province of rural Zambia was at the very crucial beginning of its construction in March of 2007. A few dollars had been donated by private citizens in Bridgewater in Virginia in the USA toward the construction of the library. A few men in the village had molded bricks and cleared the bush to begin the digging of the foundation. But there was a serious hitch that threatened to derail the project. There was no professional architect to draw the plans for the building. Any professional architect was going to demand an estimated  Ninety million Kwacha. The project was not going to have that kind of money in a million years as it was going to be always at the mercy of small individual community donors and volunteers.

As I was about to sleep agonizing over the serious problem, it suddenly hit me. I had taken a technical drawing class when I was in Form V (Grade 12) at Chizongwe Secondary School  36 years before in 1971. I could use that skill to plan and make the drawings that the builders could use when constructing the massive library. I got hold of a mathematical set box with 45 and 60 degree set squares, compass, 180 degree protractor,  a stencil, a pencil,  a ruler, and a piece of paper. Once I finished the drawings, I gave them to the foreman on the construction site. As the saying goes, the rest is history. I still cannot believe that I drew the plans of the massive sturdy beautiful building  when it was officially opened as a library with more than three thousand books on December 8, 2012. How could an untrained sociologist make effective technical drawings for a building? 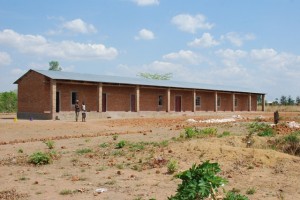 The magnificent Nkhanga  library building shows that you can use even good secondary or high school knowledge to solve life problems.

The answers to this question  has to do a lot with not just education but the value of certain forms of secondary school education. All of this came to my mind when I was looking for a family  photograph in an old photo album when two secondary school photos suddenly dropped to the floor. This was very fortuitous as I stared at the old black and white photos from Chizongwe Secondary School.

Photo of the Teachers

One photo had all the 22 teachers most of whom were Europeans. There were only 3 Zambians. This was just 6 years after Zambia’s independence and the Zambian government had a massive program to produce educated citizens to fill skilled jobs. In 1964 at Independence, “Zambia had only 100 Zambians with University degrees, about 1500 Zambians with Form V or Grade 12 school certificates, and only 6,000 with junior or two years secondary education.  There was a critical shortage of manpower which could also be called a crisis for a country that had an urgent need to achieve high levels of development.” (Tembo, 2012: p. 334) The British colonialists had left practically no skilled  man power to run and develop the country. The teachers were kind and did a great job. 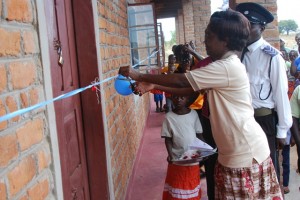 Mr. Hall was my technical drawing teacher who demonstrated how to bring to life all the lines on a piece of paper to a live building. Mr. Africa was the Headmaster. Mr. Benson introduced me to English Literature reading the classics Chinua Achebe’s “Things Fall Apart” “Julius Caesar”, and “A Man of All Seasons”. I came to love reading so much that I went on to buy and read most of Charles Dickens books. I own an entire Charles Dickens collection. Mr. Sohi from India wore a turban and introduced me to basketball on the dusty school basketball yard court although I was one of the least athletic people in the world.

Mr. Ian Martin was the world history teacher whose ideas about world wars I can still apply to international wars to day. What I gained from his class was very valuable although I has a poor score of 8 in History in my Form Five G.C. E. Exam. We nicknamed him “Mr. Tinadall” after the author of the World History Textbook. Mr. Hordyk from Holland introduced me to Math that I love up to this day. He introduced and reinforced in me the spirit of volunteerism as I worked with him in Chipata Nutrition Group to fight malnutrition. Most of the teachers were from United Kingdom and Canada.

The Zambian teachers were very inspirational models. Mr. Hapunda was a young dashing teacher who had just come out a teachers’ training college. He taught the Ballroom Club that travelled to St. Monica’s Seconadry school and St. Francis Nursing School to dance ballroom. 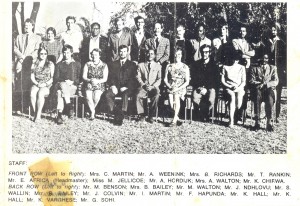 Teaching Staff at Chizongwe Secondary School in 1971. The teachers did a great job. Where are they now?

Mr. Chirwa taught me not only spoken but also written Nyanja or Chichewa. Knowing and mastering Chichewa or Nyanja and all Zambian languages is so important as Bantu languages may be the foundation of all human language to day. We Zambians and Africans or Bantus are origins of all human civilization going back two hundred thousand years ago even going back to the Pharaohs about three thousand years ago. Fergus Sharman supports this perspective in “Linguistic Ties between Ancient Egyptian and Bantu: Un covering Symbiotic Affinities and Relationships in Vocabulary.”

The Importance of  Students and Teachers

The photo of the Chizongwe Secondary School Magazine Editorial Board shows many close friends such as Weston Chirwa, Kennedy Ngoma, Simon Soko, Mussadique Kadodia, Dickson Shumba, Richard Kamanya. I have always regretted that I never met the late Charles Kateketa again after July 1975 when were both at University of Zambia as students. 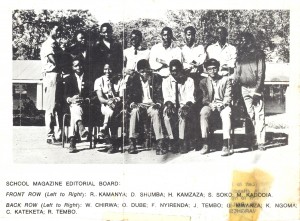 The Editorial Board of the Chizongwe Secondary School Magazine in 1971. Where are they now?

Secondary education may be the foundation of not only education but also the future character of a student. Teachers play a crucial role in gaining the education as well as establishing one’s character and integrity. We all owe our secondary school teachers and friends great appreciation.

One positive influence that may not seem obvious is that every young man needs to have positive relationships with girls very early in life. The positive influence that St. Monica’s Girls Secondary School had on most Chizongwe boys cannot be over emphasized. The influence was so powerful that one student wrote a very powerful poem that was published in the student magazine that year serenading the love and dedication Chizongwe Boys had for  St. Monica’s girls even in the boys’ dreams. What would be life without all these influences?  But what I keep wondering is where are all these people now that had such a big influence on my life?